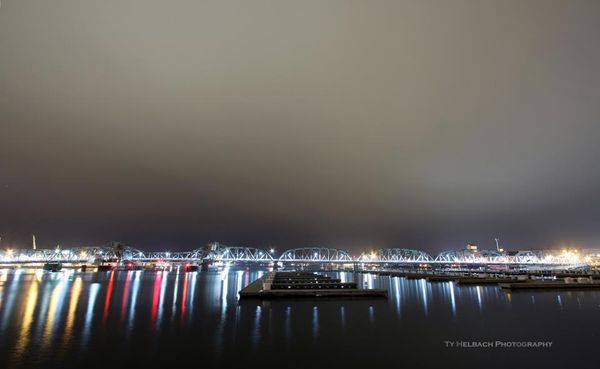 In the late 1990s, a grassroots group calling themselves "SOB" (Save Our Bridge) formed with the intention of saving Sturgeon Bay's historic Michigan Street Bridge from the scheduled wrecking ball.

After re-forming in 2005 as the 501(c)3 non-profit Citizens for Our Bridge (CFOB), the old SOBs recruited some like-minded musicians to create Steel Bridge Songfest.  The one-day concert by the bridge grew in its 2nd year to become the week-long songwriting, recording, and performance festival held every June in and around the Holiday Music Motel.

Combining preservation with creative collaboration for nearly a decade and a half, Steel Bridge Songfest - or simply, "Steel Bridge" - continues to increase public appreciation for the notorious structure while enriching its historic surroundings and supporting a growing creative community.

Songwriters and musicians from around the world, including Jackson Browne, Jane Wiedlin (Go-Go's), James McMurtry, and hundreds of others have come to the community, written their songs, and donated their efforts. Steel Bridge Songs,Vols.1-15, the multi-disc collection of songs produced by the group, grows annually, serving double-duty to commemorate past efforts and to celebrate the cause as it continues to evolve.

Since 2007, thanks to assistance from the National Trust For Historic Preservation and funds raised through Steel Bridge Songfest, Sturgeon Bay's Michigan Street Bridge has been protected as a national treasure, listed in the National Register of Historic Places. Her 80th birthday was celebrated in the summer of 2011 with completion of the long awaited rehab.

With the bridge officially "saved," the non-profit CFOB continues under the name Steel Bridge Creative Foundation, honoring the bridge as a living symbol of historic preservation combined with creative collaboration.